We were delighted to be asked to host a morning's visit by Susanna O'Brien from the Diana Award on Friday 19th November 2021 to discuss and see evidence of our anti-bullying work.

This is what she fed back to us...

'Visiting Waterloo Primary, I was struck by the emotional awareness of all the children I met. Many children were able to speak about strategies they used to calm down when they felt overwhelmed: from breathing exercises they’d learned in class, to using their sensory pencil cases and intentionally spending time in various designed spaces around the school, such as a calm corner or listening lunch. Not only were these options available and known to the children, but felt they had real influence over these features of the school environment through various channels for student voice: school councillors were consulted on key developments such as the yard, while Anti-Bullying Ambassadors led ideas for important moments in the school calendar, like Feel Good Friday and Anti-Bullying Weeks, or collaborated with other student groups like the Eco-Council on a wellbeing garden. Children all felt it was important that their opinions were listened to, and they seemed to take real ownership over initiatives within the school.

The Anti-Bullying Ambassadors specifically were a highly respected group of young people within the school community. Ambassadors and staff took great care to recruit a diverse group of young people from the many children who wanted to be Ambassadors. The Ambassadors themselves took great pride in their role – with some wanting to continue this work when they moved to secondary school, and a teacher noting that many didn’t want to remove their high vis jackets even when they were in class. The impact the Ambassadors have on their peers is significant: one child said that he wouldn’t be as confident as he was today without the Ambassadors. When he was experiencing bullying behaviour, he sat on the buddy benches in the playground and one of the Ambassadors noticed and kept him company. This made him feel much less lonely, and through their kindness he has made many good new friends. Another child felt the Ambassadors helped her through a difficult friendship issue by helping mediate between the two of them and resolve the tensions. Teachers also spoke to the benefit of having Ambassadors: by having children who are trained and motivated to resolve minor disputes, children not only feel more able to open-up to their peers about the issues they’re facing, but it also frees up some capacity for teachers.

There seems to be a clear culture of mutual respect at Waterloo Primary. This is reinforced through formal policies like the code of conduct (written with the help of Ambassadors and clearly known by non-Ambassadors who spontaneously referred to it) and is demonstrated in the day-to-day interactions between students. For example, in a moment in which a child was describing some bullying behaviour he’d experienced about his appearance, the other children were quick to jump in a remind him that he never needed to change. This child felt that Waterloo Primary was “like a family” and said the “Ambassadors changed my life”.

My visit to Waterloo Primary was incredibly enjoyable and it was extremely encouraging to see the emphasis placed on children’s wellbeing and voice within the community. We are very much looking forward to seeing the great work of the Anti-Bullying Ambassadors continue within the school.

Our History and Work

Waterloo Primary School has been actively involved with the Diana Award Anti-Bullying Ambassadors charity since 2012 and we were one of four schools nationally to receive a Diana Anti-Bullying Ambassador team award for our work that year. A special showcase video of our work was made and Twist n Pulse came to school to celebrate our efforts and champion our school. This was followed by an awards day in London, at Barclays' HQ at which our ambassadors received their awards.

In November 2013, we were further recognised through an invitation to an exclusive meeting with HRH Prince William in South Shields at which we were able to share with him our work and our thoughts on our involvement with the Charity.

Our initial team of 16 has now grown significantly and since 2012 including pupils who have now left us and moved onto secondary school, we have trained and been privileged to have a total of 93 Ambassadors come through the school.

Three of our pupils have represented the North West sitting on the Youth Board. This required them to travel to London three times a year in order to share the thoughts of their peers in how actions could be developed in order to reach more children and schools and ensure that messages were heard.

In order to be appointed as an Ambassador, pupils must write a letter of application and are then shortlisted to interview by a panel consisting of existing ambassadors and members of staff.

Our Anti Bullying Ambassadors can be seen around school in their smiley-faced Ambassador high visibility jackets supporting children with friendships, worries, play and around the Buddy Benches, where children can sit if they feel that they need a friend or some help.

As well as fulfilling their daily tasks, Ambassadors organise regular special events to raise the profile of the importance of friendship, tolerance, anti-bullying and simple acts of kindness. They are also responsible for redrafting the anti-bullying and behaviour policies.

Any parents or family members are welcome to attend meetings and make suggestions as to future events or activities that the ambassadors could organise or ways in which they could further support out school community.

Application form to be an Anti-Bullying Ambassador 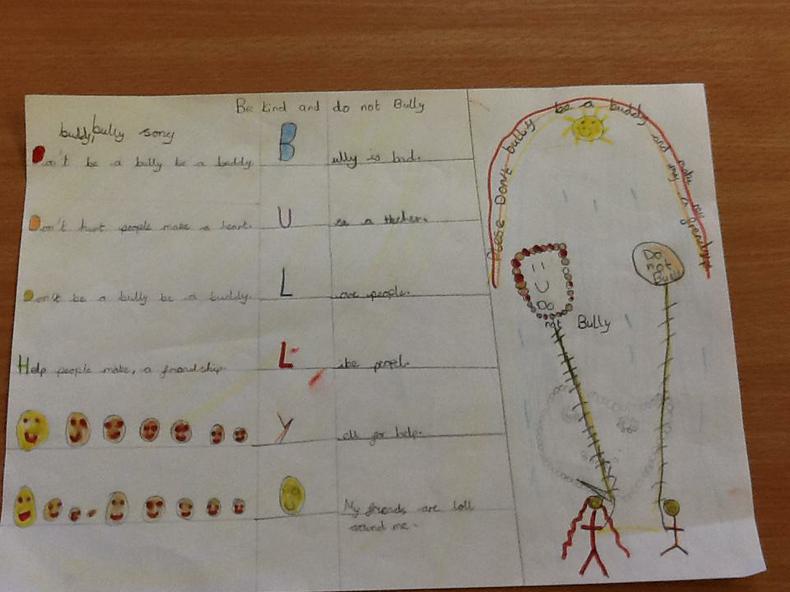 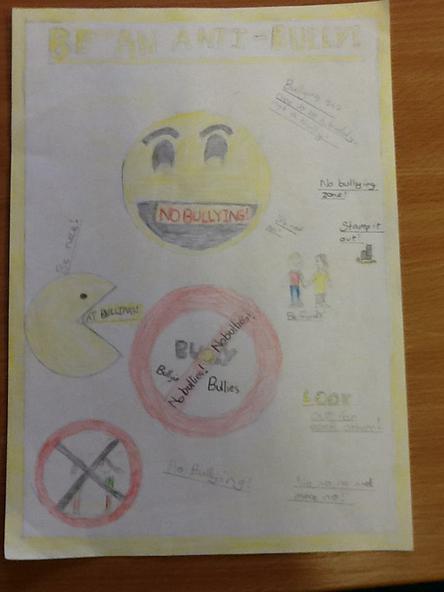 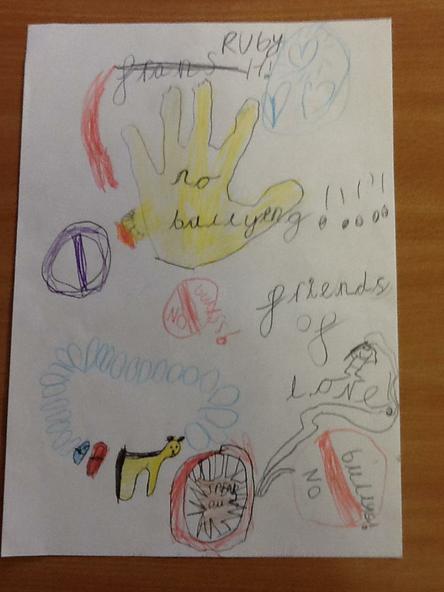 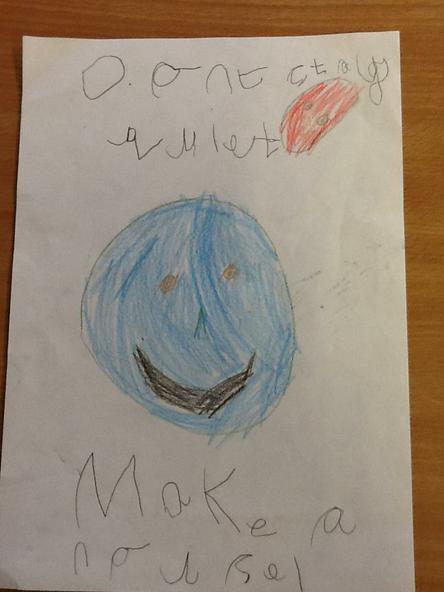 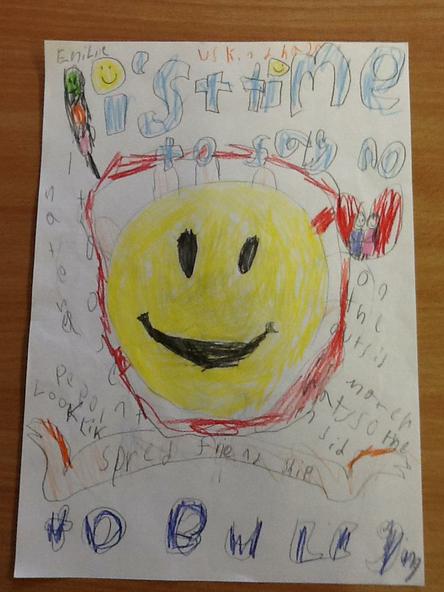 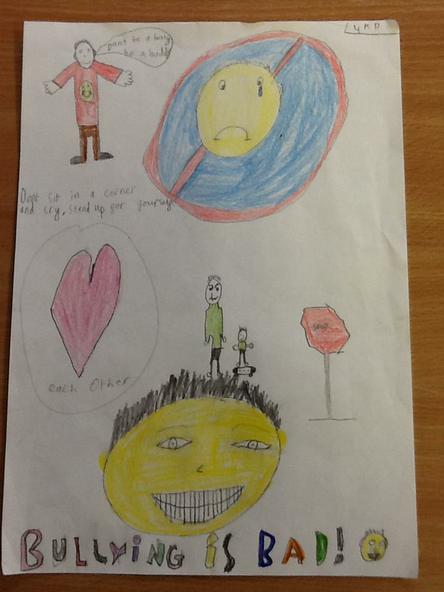 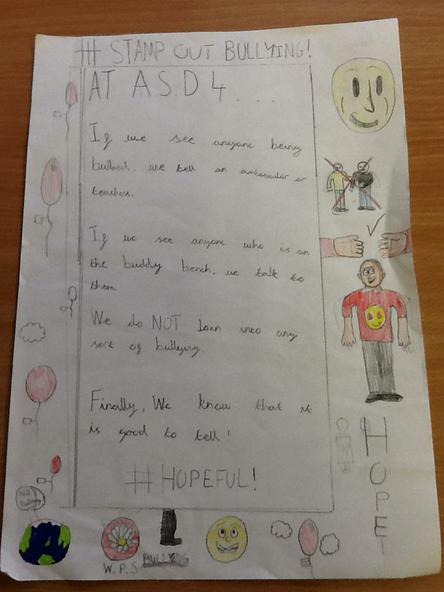 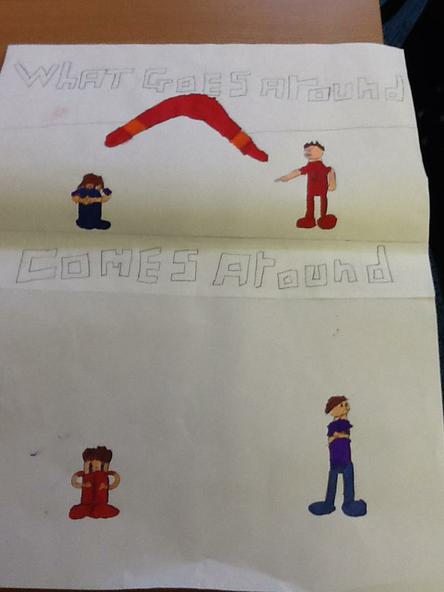 We were contacted by a Radio Merseyside and asked if they could run a broadcast on our work as they had heard that we were being very proactive.
Top

Unfortunately not the ones with chocolate chips.

Some cookies are necessary in order to make this website function correctly. These are set by default and whilst you can block or delete them by changing your browser settings, some functionality such as being able to log in to the website will not work if you do this. The necessary cookies set on this website are as follows:

Cookies that are not necessary to make the website work, but which enable additional functionality, can also be set. By default these cookies are disabled, but you can choose to enable them below: